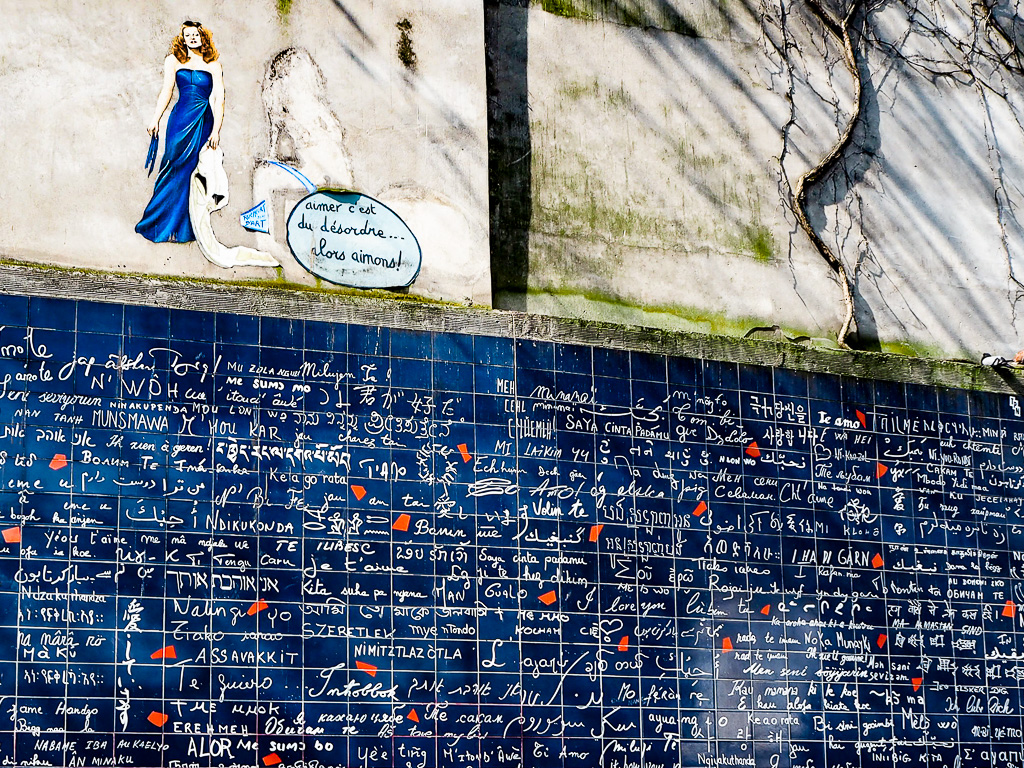 Street art can give a fascinating insight into a place, and the street art in Paris is no exception. While we have been to Paris a few times we never really had enough time to see as much street art as we would have liked so with a new trip in the works we reached out to some local street art lovers to share their favourite pieces.

Lena from Salut From Paris is first up with a great Banksy piece.

One of the most known street art artists paid Paris a visit in June 2018: Banksy!

Starting with graffiti art in the early ’90s in Bristol’s underground scene, he is one of the world most recognised artist of his genre today – and one of the most mysterious: his identity is still unknown!

His pieces are known to be satirical comments on politics and social drawbacks and he obviously did not shy away from leaving his trace all over Paris. At least 8 street art pieces can be attributed to Banksy and it is fairly possible that there are more – however, he confirmed only 8 on his Instagram account.

One of the biggest – and most iconic – real Banksy work in Paris is located just behind to the famous Sorbonne University in the 5th arrondissement. Close to the corner Rue Cujas on Rue Victor Cousin. His man tall pieces is featuring a businessman that offers a bone to a dog with three leg – while hiding a saw behind his back.

Local Paris expert Elisa from World in Paris knows more about the street art scene in her hometown than most!

Blowing is one of my favourite works of Street Art in Paris 13. This mural made on a metallic surface is a design by the Parisian street artist Christian Guémy, better known as C215.

This is a theme that Christian Guémy likes a lot: the soft blowing on the hand makes feathers or birds fly. This mural is located at the entrance of the Hospital La Pitié –Salpétrière, in Paris 13. Despite this is a recurrent theme by C215, for this mural he chose to tackle other materials and replace the bright colours typical of his works by shades of grey.

Over time, the oxidation must play and the work will be metamorphosed little by little. C215’s works are very easy to recognize by the way he treats the faces and people in general. Also, he always signs his murals with a little dice with C215 painted on its 3 visible sides.

Related: 7 Days in Paris – how to plan a week exploring the city.

Coni from Experiencing the Globe loves going off the beaten path looking for adventures. But even in classic destinations, like Paris, she finds hidden treasures.

East Paris, especially Oberkampf, Belleville and Ménilmontant neighbourhoods are bursting with street art. You’ll see murals,
painting and objects all over, giving a cool vibe to the streets. Rue
Oberkampf, Rue Laurence Savart and Rue des Cascades are among the best ones to discover the newest art scene of the city. If you only have time to go to one place, head to Parc de Belleville.

From Belvédère de  Belleville, you’ll get incredible views of the city, an unexpected open view of the Eiffel Tower, and the opportunity to discover new talents that decorated the buildings of the park.

On your way back down to the city centre, a must is to stop in Rue
Dénoyez. This alley stretches for less than 200 meters, but it’s packed with art. The piece in the photo is from Lolie Darko. It’s a great way to show how street art has strong political content, and how it can help to identify the issues of our society. Explore every corner of this road and be prepared to encounter more than one masterpiece!

Daniel from UrbanAbroad is on a mission travelling the world to learn all about cities and the future challenges they face around the globe. Follow him on Twitter for his latest updates.

After traveling around Europe and visiting some of the biggest cities learning about urban community and spaces. Street art is one part of urban culture that really inspires me. Whilst exploring Paris one piece of street art that stood out to me was a piece by Chanoir.

Chanoir who was born in 1976 is a local artist who was involved with the post-graffiti Parisian culture. His work is bursting with color and can be identified from afar.

Lots of street art pieces like this one can be seen at the popular Canal Saint-Martin and more can be found in and around Paris. You can also purchase many canvas and prints at many of the art auction sites online.

The Dance of the Emerging Fountain by Norbert

Most of us associate street art with murals and graffiti but sculptures are also street art and Paris has many cool ones. One of the street artworks on the top of my France Bucket List is the steel and glass sculpture named The Dance of the Emerging Fountain by the artists Chen Zhen et Xu Min.

This sculpture located in Place Augusta Holmes, in Paris 13, is built above the site of a former water collection plant of the Seine dating from the 19th century.  This was the main non-potable water production plant in the city, taking the water directly from the Seine before filtering it to supply watering facilities for green spaces as well as water for cleaning the pipes and streets.

The Dance of the Emerging Fountain evokes the history of the place and symbolizes the energy of the water drawn from the Seine to feed the city but also the links between Paris and the Asian community (Paris 13 has the biggest Chinese community of Paris). This work represents a stylized dragon that springs from the wall of the underground water production plant and whose body seems to plunge into the concrete that has become liquid by the magic of artistic illusion, emerging again from the ground and jumping the last time before disappearing towards the Seine.

Embrace and Fight by Connor Harrington

Carol Guttery, of Wayfaring Views, has an incredible amount of street art on her site. I highly recommend you check it out

Connor Harrington’s work depicts characters who are frequently fighting while dressed in period costumes. He photographs his friends in a tableau and then translates the images onto a large scale mural with a broad brush, drippy style. His works are so particular that once you seen them, you’ll always recognize them. I’ve found his work featured in London’s Shoreditch street art scene as well as in Bristol, Belfast and here in Paris.

The piece featured here is called “Embrace and Fight”. You can find it in Paris’ 13th Arrondissement. This neighbourhood is full of eye-popping large-scale murals. The Harrington mural (as well as many others) are part of the XXL Walls project in the 13th.

To find them, take the metro to the Nacionale station and then look up as you walk south following the tracks to the Chevaleret station.

Love is in the Air by Bern

Sue from Travel For Life Now has written extensively on street art and we often check her blog before we head off to a new destination.

The Belleville area of Paris is full of street art. Love is in the Air by Berns is located near 1-5 Rue Lemon. Berns is a New Zealand street artist currently residing in Paris.

Also known as El Ultimo Inca (the Last Inca), Berns’ street art is influenced by his Peruvian heritage. In his work, he plays with dualities. In this instance, it is a contrast between what appears to be male and female rabbits in love. And, it’s a New Zealand artist of Peruvian heritage painting in Paris. I love the confluence of these differences and commonalities

(You can also see an interesting evolution of street art and local culture in Phnom Penh Street Art).

Berns has played a role in the development of street art in Peru. In 1999, he founded DMCJ crew, a graffiti group in Peru. In France, he has been part of the Army of Snipers and ODV crews. In addition to Paris, New Zealand and Australia, Berns’ murals can also be found in Europe (Italy, Switzerland, Spain, Germany, Belgium, Luxembourg and England), South America (Argentina, Chile, Ecuador) and the US.

In a small garden square among the cobbled streets of Montmartre, there is a wall that people from all over the world flock to. The ‘Wall of Love’ or Le mur des je t’aime is a huge 40 square meter mural made of over 600 blue tiles that exclaim ‘I love you’ 311 times in different fonts and in over 300 languages.

The mural was completed in 2000 and is a collaboration piece by calligraphist Fédéric Baron and mural artist Claire Kito. Baron is said to have asked strangers on the street how to say and write the most romantic words in their language before compiling the piece that is an antidote to individualism and violence. Where walls are usually built to divide and separate, the artists wanted their work to inspire love and peace.

When we visited, a stencil of Rita Haworth by artist Rue Meurt d’Art looked down on the crowds below with the inscription loosely translated as – “ Loving is chaotic, so let’s love!”

The mural is now a popular spot to propose in Paris, the city of lovers. You can visit the garden square from 8 am on weekdays and 9 am on weekends and public holidays however closing times depend on the season.

Find all the Banksy’s works in Paris
Street Art 360 has a great street art map
The Paris Tourist centre has a guide to 5 areas to explore for street art finds of your own.

This post may contain affiliate links. If you book via these links, we may make a small commission at no extra cost to you.

While I love the serendipity of stumbling across murals as I stroll the streets of a city if you have limited time in Paris then joining a Street Art Tour is the best way of finding the good stuff quickly and also learning more about the meaning of the works and the artists themselves.

Most of the tours cost less than $35 making them money well spent in my book.

This page is a work in progress so please check back later for updates of new finds.

Save this list of Street Art in Paris for your travel planning.